HAARETZ: Running down a dance

Home / HAARETZ: Running down a dance 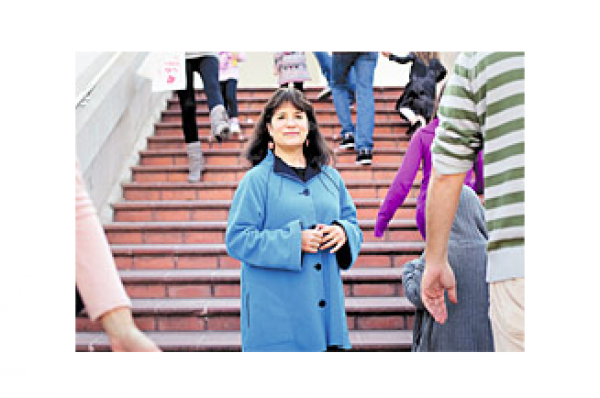 What's a lover of dance who can't perform herself to do? In Janice Ross' case, become a preeminent scholar on the subject - going so far as to chase a story about an obscure Russian choreographer across continents

Leonid Jacobson bears the distinct honor of being both the only Jewish choreographer active in the Soviet union during the Communist era and a man who won praise from Mikhail Baryshnikov and Natalia Makarova after they defected to the West. The search for Jacobson has brought dance historian and researcher Janice Ross to Israel.

"When I was a dance critic, I kept hearing about a Jewish choreographer whose works were amazing, but no one had ever seen them outside of Russia," says Ross. "There was an attempt to erase him. His work was either prohibited or censored or repressed for years during his lifetime."

In the 1980s Ross learned that in San Francisco, not far from where she lived, there was a ballet teacher called Irina Jacobson who taught technique in an unusual way. Ross found out she was the widow of the choreographer, who died in 1975.

"The first thing I did was a feature for The New York Times about him and her," she recalls. "Then I've spent the last 20 years getting to know his work through her. I have also been to St. Petersburg, to their apartment and to their archive."

About 10 years ago, Jacobson moved to Israel. She now divides her time between Israel and abroad. "During half a year she teaches at John Neumeier's Hamburg Ballet and during the other half she lives in Haifa," says Ross. "She is in demand all over the world. The Royal Ballet wanted her to be their permanent teacher. She is the finest teacher of the classical Russian ballet technique alive today. She was the last protegee of Agrippina Vaganova."

Ross came to Israel at the beginning of September as part of the Fulbright exchange program for scholars and students. She is lecturing at the Academy of Music and dance in Jerusalem, helping to enrich the documentation on Leonid Jacobson at the Beit Ariella dance library in Tel Aviv and interviewing his 86-year-old widow in order to write a book about his life and work.

Ross, 60, was born in Los Angeles to Jewish parents. When her parents got married in the 1940s, her mother convinced her father to change his last name from Rosenblatt to Ross to avoid anti-Semitism. When she was a child, Ross' family moved to the Bay Area near San Francisco, where she started studying ballet at an early age and later studied the Graham method of modern dance. At the same time, Ross also developed her talents in the area of visual arts.

Though for many years she studied the practical side of dance, her passion for the field in fact stems from her theoretical interest in it.

"I was never a strong enough dancer to become a performer and I didn't enjoy performing," she admits, "but I loved thinking, I loved talking about what was good in a performance and what wasn't. And I was seeing dance all the time."

After completing her bachelor's degree at the University of California, Berkeley, (where she combined practical and theoretical art courses with dance courses ), she decided she wanted to be a dance critic.

"I wanted to write about dance in the same deep and thoughtful way that I saw the arts being written about," she explains. "As an art history student I read criticism of contemporary art but nobody was doing that about dance. I remember seeing the Merce Cunningham company and I thought to myself, 'This is modern art,' but there was not any way to write and reflect about it."

Ultimately she went to Stanford University to study for a master's degree in dance education. She started writing dance criticism for the school paper. She finds the first review she wrote a bit embarrassing.

"I reviewed Paul Taylor," she says. "It was one of the last times he performed, and I was awful. I wrote he was too old and too fat, that he shouldn't be dancing anymore."

She quickly expanded her writing repertoire: "I wrote for small papers at Berkeley, weekly newspapers in San Francisco and by 1980 I had the offer of a full-time staffed position on Oakland Tribune, which at that point was one of the two major daily newspapers in San Francisco. I was the first full-time dance critic on the West Coast. That was like a dream come true."

For 10 years she worked feverishly.

"I wrote five or six stories a week and I was at the theater every night," she says. "Laptops weren't invented yet, so I would go to San Francisco, see a performance, come back to Oakland, write the review and submit it by 2:00 A.M."

What is your opinion of dance criticism today?

"I think it's a dying profession in print media in the United States and I'm very distressed. Last October I organized an international summit in New York on the future of dance writing. There aren't enough paid places, many critics have been fired and people don't read informed criticism. And this is going to affect the future of dance history, because the front-line documenters in the field now are the critics. I use them all the time as historians. I go back and read reviews."

Ross believes the death of dance criticism is a harbinger of the end of dance as an art as we know it, calling it the "canary in the mine shaft."

"The situation will have serious consequences for the quality of dance that gets produced and the level of knowledge and discernment among the audience, because the refinement and development of dance as an art form go hand in hand with good, thoughtful criticism. And I think the cultivation of a really good dance audience depends on informed viewing. I believe deeply that you have to be educated in order to see more in the arts, that not everybody's opinion is equal. This is sometimes controversial."

This is a statement that could be seen as radical.

"But we accept it when it comes to the sciences and we don't expect an amateur to make an informed judgment about something in regard to a scientific field. Yet in the arts there is this sort of fear about appearing elitist or believing in a standard and I think that's somewhat hypocritical."

Shrinking instead of expanding

Ross, the mother of two, is married to an Israeli ex-pat ("He was born in Bat Yam and immigrated to the United States with his family when he was eight years old" ). Over the years, parallel to her work as a critic, she has taught courses on dance theory at Stanford. After her children grew up she went back to a full time job at the university and completed her doctorate.

"At that time I began publishing books and I stopped doing criticism entirely," she says. "The journalistic writing made my thinking shrink rather than expand and I wanted the space to write in a much more involved and lengthier way."

She wanted to write her doctoral thesis about American dance artist Anna Halprin (whom she met when she was writing for Dance Magazine about Halprin's work with AIDS patients ). However, since the thesis was for the school of education at Stanford, the topic was not approved. She decided instead to write about Halprin's university teacher, Margaret H'Doubler. The dissertation was published as a book in 2000.

However, she did not give up on writing Halprin's biography and she published it in 2007. In that same year she published her book on the San Francisco ballet, the oldest company in the country.

In the 1990s Ross developed a course at Stanford in which students are sent to work with minors in prison, some of them serving time for murder. "We teach them dances like hip-hop and jazz," she says. The project, she says, "helps students see these youngsters with a more humane eye." Ross cites Merce Cunningham's "Walkaround Time," in which he himself danced, as a a piece that influenced her early on. Jasper Jones, inspired by Marcel Duchamps, designed the scenery for the piece.

"It was extraordinary. I had no idea dance could express or explore that kind of abstraction. I can still feel which seat I sat in at the theater when I saw that," she says.

As for dance today, Ross mentions post-modern choreographer Ann Carlson who creates mainly solo pieces and performs with animals, and William Forsythe. In Israel she has been very impressed by the works of Ronen Itzhaki and Idan Cohen.