It would be best to recognize the limits to contact and perhaps find ways to motivate individuals to work toward the mutual interest of both Israelis and Palestinians.

Why does prejudice exist? In the 1950s, American social psychologist Gordon Allport argued that the root cause of prejudice was the separation of groups. Lack of contact between groups resulted in misinformation and allowed for “prejudiced personalities” to dominate societies. Contact might allow group members to see their commonalities as human beings and to see the prejudice and stereotypes that divide them as unfounded and irrational.

This elegant and intuitive hypothesis provides the rationale for countless programs in Israel, the US (see Seeds of Peace) and the rest of the world, that aim to foster coexistence between Israelis and Palestinians. Despite the good intentions of those who organize and finance these programs, research shows that the long-term outcomes of such programs may be, at best, inconsequential and, at worst, harmful.

Early work by Israeli researcher Yehuda Amir, for example, noted that “coexistence” encounters consisting of Jewish and Arab Israelis would often lead to increased tension – or reduce prejudice only among Jewish Israeli participants.

Our research has shown that while such programs may reduce prejudice in the short term, these effects eventually erode and, at times, give way to more extreme views. One study, for example, consisting of interviews of former participants in an Israeli-Palestinian coexistence program based in the United States, found that most of the participants retained a polarized view of the conflict.

As the work of Israeli researcher Tamar Saguy shows, disadvantaged and advantaged groups enter the contact setting with different expectations and goals.

Members of disadvantaged groups have a desire to discuss issues related to power.

Most contact programs avoid these topics, given that they might cause tension or disagreement. Ignoring such issues, research shows, can decrease the willingness of members of disadvantaged and advantaged groups to pursue meaningful social change.

“Confrontational” models of contact, pioneered by scholars at the Neveh Shalom/Wahat al-Salam School for Peace in Israel, address such “uncomfortable” topics directly. Here the aim is not to reduce prejudice but to promote awareness of the real conditions that maintain the conflict and to encourage participants to become engaged in a political resolution. There is evidence that this model does get participants to challenge their assumptions regarding the conflict as well as to empower Palestinians within the dialogue space. However, as noted by Hebrew University professor Ifat Maoz, confrontational-based programs are more likely to lead to destructive dialogue.

There is also no evidence that more contact leads to actual peacebuilding and the conflict has only escalated despite the flourishing of the contact industry in Israel and abroad. It is worth noting that Allport developed the “contact hypothesis” in the US during the Civil Rights era.

Contact was therefore intended to address issues of irrational fear and prejudice of the other, not to alter the political or structural inequalities between blacks and whites. Similarly, peace between Israelis and Palestinians seems more likely to progress as it has in Northern Ireland, South Africa, the former Yugoslavia, and elsewhere – through political resolution and structural change, not simply contact between Jews and Arabs.

Until that day comes, it would be best to recognize the limits to contact and perhaps find ways to motivate individuals to work toward the mutual interest of both Israelis and Palestinians: a political resolution to their long-standing, resolvable conflict. 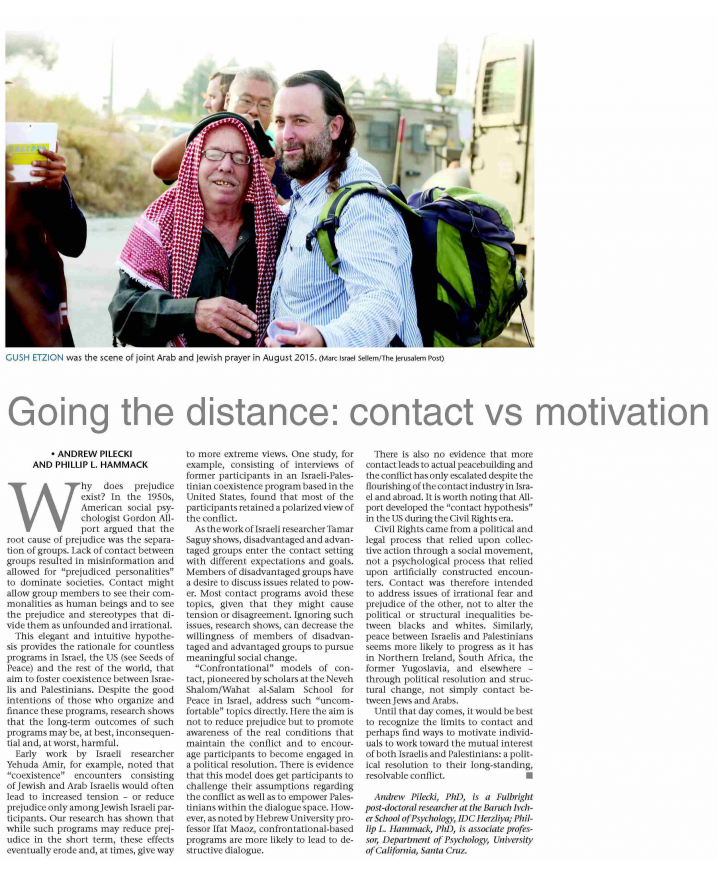