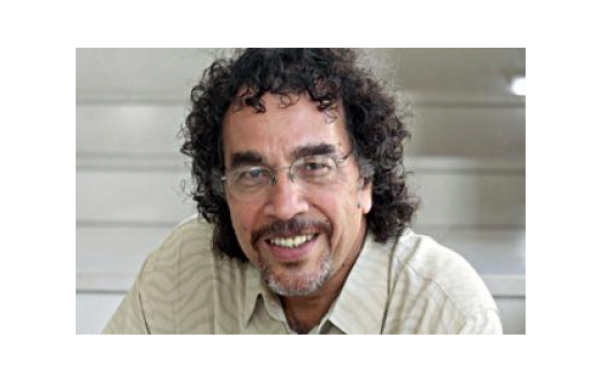 Iranian theater professor Mahmood Karimi-Hakkak, here in Israel on a Fulbright Fellowship, wants to foster understanding through the stage.

Mahmood Karimi-Hakkak, a theater professor at Siena College in New York, was born and raised in Iran. In 1976 he seized an opportunity to get a passport and departed within two weeks. He studied in the US for his BA, MFA and SED. In 1992 he came back to Iran for a visit and stayed. He got married, and thought he would be able to fulfill his dream of living his life in the country he always called home.

However, seven years later he was again in exile, after staging a theater production which the authorities accused of “raping the public’s innocence.” Although he’s been back in Iran for several visits since then, he has not been arrested. But neither have the authorities closed the case against him.

Since August of this year Karimi-Hakkak has been in Israel on sabbatical, on a one-year Fulbright Fellowship. Mahmood Karimi-Hakkak is visiting Israel as a Fulbright fellow. Fulbright is one of the world’s most prestigious and widely-known academic exchange programs and fellowships, and its primary goal is to strengthen the foundations of peace by increasing the understanding between the American people and the peoples of participating nations around the world.

Karimi-Hakkak’s demeanor is extremely open and warm, yet he doesn’t flinch when he says with a smile: “I’m here to meet the enemy.” He chose to live in Jaffa rather than in Tel Aviv “in order to experience fully both the Arab and the Jewish ways of life.”

A director, producer, writer and poet, Karimi-Hakkak is conducting research on peace-building through Theater. His work focuses on the creation of dialog – which he considers to be the basis of theater – between cultures in conflict. In Israel, he is working on a documentary film on the possibilities of dialogue between Israeli and Palestinian theater artists. “I want to expand the dialogue from the stage to the audience and from the audience to the community,” he says. “I believe theater is what happens in the minds of the audience as they leave the performance.”

Karimi-Hakkak gives a course titled “Iran Today” at Tel Aviv University, teaching students about the Iranian people and the country’s culture and arts. He believes “tension between societies in conflict will drastically reduce if young people get to know each other.”

DURING HIS last seven years in Iran, Karimi-Hakkak proposed the production of 125 plays to the Iranian Ministry of Culture. He was eventually granted permission to produce Shakespeare’s A Midsummer Night’s Dream, but it soon turned into what he calls “a midwinter nightmare.” His rehearsals were frequented by officials, who interfered with every aspect of his work. And after only three performances the production was brutally terminated by the authorities mid-show, and the audience was sent home after waiting for hours for the play to resume. That was when Karimi-Hakkak was asked to leave the country.

Devastated, and concerned about the future of their 18-month old twin girls, Karimi-Hakkak and his wife left for New York. With $1,000 in their pockets, they began a new life.

What did his family think about coming to Israel?

“My girls, who were almost 12, hated the idea; so did my wife,” Karimi-Hakkak says. “Of course, now, after all the kicking and screaming, the girls love it here.”

One night last August, they were all walking on the beach in Jaffa, where men and women were bathing in swim-suits, and saw Arab women walking, some covered from head to toe. “It was beautiful to see that everyone’s manners are respected,” he says. “My wife said to me, ‘I wonder, why can’t it be like this in the Caspian Sea?’”

Karimi-Hakkak describes Iranians as warm, educated, peace-loving people, and points out that Iran hasn’t attacked another country in over 200 years, other than in self-defense. “Iranians have resisted extreme Islamic rules and regulations for 30 years now – more than any Arab nation,” he says. “Many women are still letting the hijab fall from their heads, and people are fighting with their bare hands against dictatorship.”